By Dave Johnson
In Blog 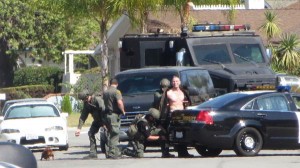 In my youth I’d be the last person to ask for advice for handling an incident like former UFC fighter Jason Miller’s unfortunate run in with the police serving him a warrant but I gotta throw this out there. When you’re in a no win situation like the one he was confronted with the last thing you want to do is poke law enforcement. I’ve learned over the years “silence makes no mistakes” (if O.J. Simpson didn’t teach the world that no one will ever catch a hint) and not to take an unnecessary beating, shots, or charges at the hands of an inexperienced or unprofessional public servant. Chose your battles and your lawyers wisely.

While my moral compass doesn’t always point in the right direction on it’s own I’ve been in enough court rooms to be able to say, “do as I say, not as I did.” While this blog entry has more to do with what I believe is common sense and not MMA or the fight game I’ll leave it short. Jason has always been a respectful person to me and I hope he or anyone that may be in similar type incident doesn’t let ego or ignorance step in way of life. It’s too short and there is always light at the end of the tunnel. There’s always someone out there that cares no matter the circumstances.