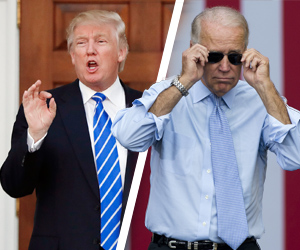 “This takes the cake for the most outrageous thing I’ve even been asked to make a price on,” renowned boxing and MMA oddsmaker Joey Oddessa says after releasing hypothetical odds on a Trump vs. Biden bout.

Oddessa has been constantly lobbied by sports fans and political analysts to set odds on a fictional fight between the Commander In-Chief and the former VP ever since the two traded barbs about who could beat who in a fight earlier this week.

On Wednesday, Biden said he would “beat the hell out of” Trump if they were in high school, taking offense to the President’s past comments about women. Trump countered Thursday, tweeting out a response which was capped with, “He doesn’t know me, but he would go down fast and hard, crying all the way. Don’t threaten people Joe!”

“The Donald’s the bigger guy and I like his confidence. He really believes he would put Joe on his ass if they laced them up,” says Oddessa.

While the possibility of this fight ever taking place is outlandish, Oddessa’s process behind setting the odds for Trump vs. Biden wasn’t. Like most boxing matchups, he went to the tale of the tape to see which political heavyweight would have the edge in the ring.

“I gotta like Trump, but not by much,” admits Oddessa. “Trump’s the bigger guy at 6-foot-3 and 235 pounds. While the U.S. Senator from Delaware is a former high school and college football and baseball player, Biden’s all of a buck eighty in clothes.”

“If you really had to sell this thing, you could say the Donald is about the same size as Tim Tebow,” Oddessa adds.

Trump (71) is also four years Biden’s junior (75) and according to White House doctors is in excellent health despite past news reports and books stating that the President consumes 12 Diet Cokes a day and regularly eats McDonald’s, KFC, and pizza – three things you can be sure aren’t in Tim Tebow’s diet.

It would seem Oddessa isn’t the only person leaning towards Trump in this fantasy fight: current Vice President Mike Pence gave his ring-side analysis of the match on Howie Carr’s conservative radio show Thursday. Pence jokingly stated, “You know who I’d be betting on.”

And, thanks to one of the top oddsmakers in the industry, you might just be able to place that bet Mr. Vice President.