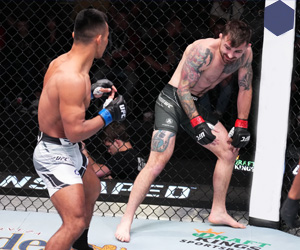 The UFC fight on Saturday between Darrick Minner and Shayilan Nuerdanbieke, which ended abruptly in the first round, is being investigated by a U.S.-based betting integrity firm after several sportsbooks in multiple states reported suspicious wagering on the featherweight bout.

The odds on Nuerdanbieke defeating underdog Minner moved dramatically in the hours leading up to their UFC Fight Night matchup in Las Vegas. Bettors were convinced that not only would Nuerdanbieke win, but he would do so in the first round.

Money poured in on the favorite to win by knockout in the first round and for the fight to last fewer than 2.5 rounds, prompting some sportsbooks to take the fight off the board, according to an analysis conducted by U.S. Integrity, a Las Vegas-based firm that works with sportsbooks and state gaming regulators to monitor the betting market, a copy of which was obtained by ESPN.

On Saturday, with rumors circulating among bettors that Minner was injured, Nuerdanbieke’s odds to win moved from -220 to -420 in the four hours before the fight. Just 30 seconds into the fight, Minner threw a left kick to Nuerdanbieke’s body and immediately grimaced and reached for his left leg.

Nuerdanbieke closed in and Minner went for another left body kick before Nuerdanbieke dropped Minner with a knee to the head and finished on the ground with elbows. The TKO stoppage came at 1:07 of the first round.

It was Nuerdanbieke’s first finish in the UFC in four fights with the promotion. Minner, a 10-year MMA veteran, has now lost three straight and four of six UFC fights.

As sportsbooks grew suspicious of the unusual betting leading up to the fight, they contacted U.S. Integrity, which in turn conducted a thorough analysis of the situation and alerted state gaming regulators and other sportsbook clients to the irregular betting roughly three hours before the fight began at 8 p.m. ET.

The betting didn’t stop, according to the analysis, even after the odds moved to significantly less attractive prices. The relentless betting on the worse odds only increased suspicions among some bookmakers and U.S. Integrity.

"Our goal as always is to notify the industry of any potential nefarious, abnormal or suspicious activity as soon as possible, so they can take action as quickly as possible," Holt told ESPN. "In this case, we hope that by sending a couple hours before the fight started, we may have helped prevent some more suspicious bets from getting through."

U.S. Integrity does not have any enforcement power, which means any response to the firm’s investigation would have to come from regulators or other authorities.

The UFC responded Monday via statement.